I will seize fate by the throat; it shall certainly never wholly overcome me.
~ Ludwig van Beethoven

the people you see; most of them don’t sleep well, they frequently feel stressed out, and they want to

lose weight, but can’t seem to. And while there are always other factors involved, most of the time any

and all of these situations can be attributed to the thyroid gland, and how well it’s functioning.

The thyroid is a little gland that hugs your trachea, just above your collarbone and plays an integral

role in every single bit of everything that goes on in your body! A major player in the feedback loop

between the hypothalamus and pituitary glands located in your brain, known as the HPT Axis, the

thyroid regulates all of your cellular metabolism; how you grow, heal and regenerate, how you

process food into energy, how you sleep, all of your hormonal (endocrine)systems, that means

reproductive, adrenal, and immune systems, even your blood pressure and central nervous system-

everything relies on the thyroid.

Thyroid and other Endocrine disorders are common in today’s population, particularly among women,

who go through major hormonal changes during pregnancy and menopause, but men aren’t immune,

note the new phenomena of Andropause that’s sweeping the nation.

the world’s population) increased use of varying forms of radiation from Xrays and microwave ovens,

and the fact that we surround ourselves with Endocrine Disrupting Chemicals in plastics, pesticides,

perfumes, cosmetics and even some foods! 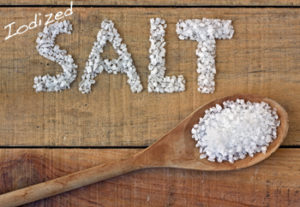 Every cell in the body craves the trace mineral iodine, and the thyroid is in 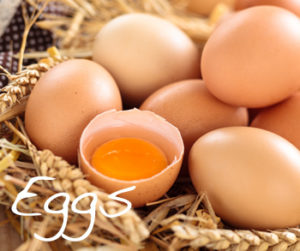 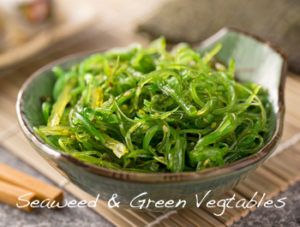 and dispersal. Found most abundantly in oceanic foods like kelp, and dulse seaweeds and spirulina

Seaweed and DarK Leafy Greens
Interesting tidbit: most inland folks used to get it primarily from wheat, as it was used when

processing flour (more on that in a later post) it was then added to table salt. But, salt became a pariah in

the last few years because of it’s suspected links to High Blood Pressure, and people were advised to cut down.

In pregnancy, severely low levels of iodine can cause “cretinism” or mental retardation coupled with

physical deformities, as well as deafness, and other forms of mental illness. Iodine deficiencies in

early childhood stunt the development of the Central Nervous System and can result in low IQ, and also lead

to ADD. During menopause, iodine deficiency can increase the risk for breast cancer, which appears

in higher rates in areas where goiters are common, particularly around the Great Lakes and the

central United States, where access to sea foods is minimal.

Save Money when you request appointments with the Healthbanc app!

Get the Healthbanc app here: